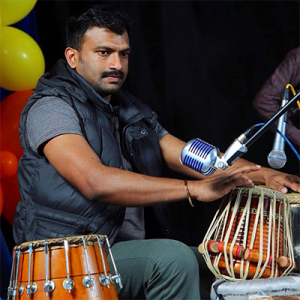 Mr. Vinod Navadhara (Vinodkumar Sukumaran) is a renowned percussionist who hails from Kerala is expertise and vast knowledge in handling various percussion instruments helped him to develop his career as a pure musician. Over a period of 25 years of experience, he has succeeded in securing his position in the act of live musical performance with an enviable record of having performed in more than 2500 stages across India and Europe.

Mr. Vinod Navadhara started learning Tabla and Mridangam, the percussion instruments, at the age of 9. Initially he studied Tabla, the membranophone percussion instrument, under the guidance of Mr. Das for 7 years and later on, to achieve grater proficiency, he became the student of Mr. Mohan, the teacher from Kalabhavan Cochin for further 4 years.

Mr. Vinod Navadhara     learned Mridangam, for 8 years from the All India Radio (A.I.R) fame Chinnakkuttan Master, also nick named as ‘The King of Percussion’. In addition to this, his strong passion and enthusiasm to learn various percussion instruments channeled him to start learning ‘Chenda’ the typical Kerala percussion instrument also known as ‘Asuravadhyam’. Mr. Vinod Navadhara studied Chenda for a period of 8 years under the guidance of the very famous Chenda Masters named Alappey Sasidharan Marar and Thrippoonithura Jagajith Marar.

Subsequent to his studies, Mr. Vinod Navadhara entered in to the world of Music through the well-acclaimed Music Company in Kerala; South India, called Poonjar Navadhara, which is registered with the Kendra Sahithya Academy.  There, he started his career as the Tabla and Mridangam artist and continued his service as a Musician and Manager of the Company for a long period of 19 years. Apart from this, he extended his service as a Music Teacher for the Navadhara School of Music, Sangeetha Mahal and the Vrindavadya School of Music in Kerala for 13 years as well.

Vinod Navadhara has played Mridangam for Carnatic Concerts in more than 250 stages for a number of artists including the eminent Vocalists Nedumangad Sivanandan, Mannoor Rajakumaran Unni and Pala Usha Kumari. 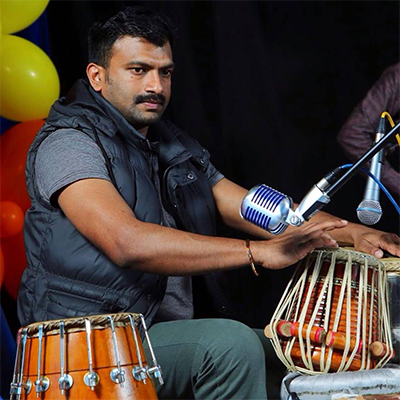