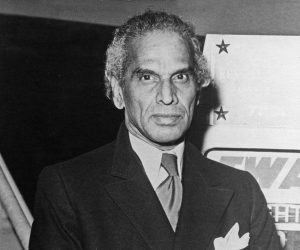 Vengalil Krishnan Krishna Menon founded Kerala Samajam, which is believed to be the first Malayalee Community organization in the UK. Kerala Samajam was later registered as Malayalee Association of the UK under the Friendly Societies Act.

Menon was an activist, councillor, diplomat, lawyer and editor. Born in Calicut, south India, he attended the Native High School there before studying for a BA at Presidency College, Madras, and attending Madras Law College. Encouraged by Annie Besant, he travelled to England in 1924, originally to take up a job at a Theosophists’ school in Letchworth. In England, he continued studying law, and was called to the Bar in 1934. He also studied at the London School of Economics under Harold Laski, gaining a BSc and an MSc in politics as well as a teaching diploma.

Menon joined the Commonwealth of India League on his arrival in England, becoming joint secretary in 1928 and transforming the organization into the India League, with Indian self-rule as its stated goal. For the next two decades, he campaigned tirelessly for the India League alongside key British political figures such as Bertrand Russell, Harold Laski, Michael Foot and Fenner Brockway, as well as other Indians in Britain. Financing most of the activities himself, he held meetings, organised events, addressed groups, produced articles and pamphlets, and lobbied key Labour MPs. In 1932 he organized and, with Labour MPs, participated in a delegation to investigate social, economic and political conditions in India, publishing the findings one year later. The publication, Condition of India, with a preface by Russell and a cover by artist Eric Gill, was banned in India. Menon also enjoyed a close working relationship and friendship with Jawaharlal Nehru, helping to put forward Congress‘s position in Britain and coordinating Nehru’s visit to England in 1935.

Krishna Menon edited the Twentieth Century Library series for the Bodley Head from 1932 to 1935, and became founding editor of Pelican Books, the non-fiction, educational imprint of Penguin Books, in 1935. A committed socialist, he was concerned with the plight of working-class Indians in Britain – supporting the lascar strikes of the late 1930s, for example – as well as that of their British counterparts. He was Labour councillor for the Borough of St Pancras from 1934 to 1939 and from 1944 to 1947, working alongside Barbara Castle, and an independent councillor from 1940 to 1944. In 1944 he established the St Pancras Arts and Civil Council, and in 1945 he was appointed chairman of the Education and Public Library Committee. In 1955, Menon was made a freeman of the Borough of St Pancras in recognition of his significant contribution. Menon came close to becoming a British Member of Parliament when he was pre-selected by the Labour Party for the safe seat of Dundee in 1939. His candidature was cancelled, however, because of his primary allegiance to India, and he resigned from the Labour Party in protest, rejoining again in 1944.

In 1947, Krishna Menon was appointed independent India’s first High Commissioner in the UK. He held this post until 1952 when he returned to India to pursue his political and legal careers there. He died in Delhi in 1974.