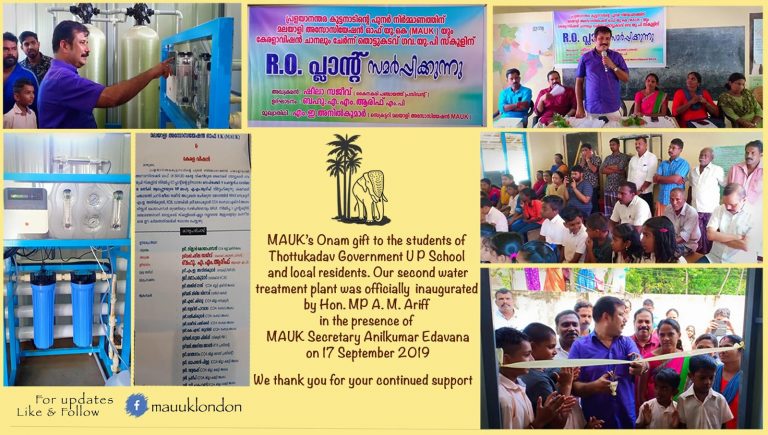 In August of 2018, Kerala witnessed the worst deluge in almost a hundred years, which claimed over 500 human lives. Homes were submerged and buried with over a million people left homeless, livestock that many poor relied on for their daily bread destroyed and waterborne diseases took a toll on human health. The scenes were and still are heartbreaking. Keralites across the world were in awe as they watched the devastation live on 24-hour news channels. It was hard for them to comprehend that Mother Nature would unleash such fury on Kerala, their beautiful motherland, the land of calm and serenity where people worship the nature, and sustainable development has seen human progression achieved in harmony with the environment.

MAUK led the way in taking a proactive response to the disaster here in the UK. Realising the magnitude of the disaster, MAUK was one of the very first organisations to swiftly evaluate the situation in the affected area through our members and volunteers who had been on holiday in the area and our local contacts. In the initial days following the floods, MAUK volunteers collected essential non-perishable items including food, medicine, clothes and dry-cleaning products. They forwarded it to members of the Loka Kerala Sabha who arranged cargo and distribution facilities. The coverage we got from BBC London News helped with raising greater awareness of the grave situation. Following the BBC report, our relief efforts saw a boost in offers of clothes and other items, especially from the Indian diaspora. While we accepted all non-perishable items, we had to politely decline offers of clothes as the officials working on the ground informed us of the impractically of sorting, cleaning and distributing them in a dynamic emergency. This issue was highlighted by a news report that over 200 ties and even unhygienic undergarments sent to Kerala, which had to be disposed of at the expense of the valuable time and efforts of relief workers. Although some callers could not comprehend the logic behind our decision not to accept old clothes and shoes, most were understanding and helped out.

Throughout our campaign, MAUK used our social media to request for support and to make updates about our relief effort, but as it is not MAUK practice, we did not provide live video coverage of our efforts. MAUK believed that the floods were so severe that it warranted help from established NGOs that have vast experience in fundraising for disaster management. We wrote to the Disaster Emergency Committee (DEC), requesting them to launch a nationwide appeal. However, as the central government did not declare the floods as a national emergency, the DEC informed that they could not get involved. We were also disappointed with the lack of media coverage given to the floods here in the UK. Hence, we wrote to the BBC requesting to provide the matter with appropriate significance.

Three days following the Kerala floods, MAUK launched its first fundraising appeal through the Charities Trust fundraising platform – sponsorme.com. Our appeal did not specify how we will utilise the money raised but promised to be transparent and spend the money for the neediest in Kerala. Through this page, we have raised in the region of £20,000 from 241 sponsors. Besides, 11-year-old Ryan Kunnummal from Birmingham also raised over £650 through his Sponsorme page. Solihull Malayalee Association also contributed around £600 collected from their members. Also, many individuals who raised funds at their place of work donated it to the MAUK appeal.

While the wounds caused by the floods were still causing tremendous heartache to UK Malayalees, MAUK realised that it would be inappropriate to go ahead with the planned Onam celebrations. So, we cancelled our Onasadhya, an age-old tradition that is much revered in the MAUK annual calendar since the 1970s. Our fundraising efforts got an extra boost when nearly all those who booked tickets for the Sadhya contributed their ticket money towards our appeal. The initiative by local Malayalee restaurants, Thattukada, Adukalla and Anantapuri to donate part or all the profit they made from Onasadhya to our appeal was noteworthy and humbling.

It was not feasible for us to cancel the Onam show as preparations were in advance stage. Therefore, we decided to strip the celebratory aspects of the show and turn it into a fundraising event. The event took place at Redbridge Town Hall on Sunday 16 September with a musical concert by playback singers from Kerala, Kannur Sherif, Pradeep Babu and Renjini Jose being the main highlight of the show. The response we received from the local community, businesses and government officials were heart-warming. MAUK’s main sponsor, Swayam Property Services, kicked off the event with a donation of Rs 2 lakhs. The Worshipful Mayor of Redbridge, Cllr. Debbie Kaur-Thiara, allowed the free use of Redbridge Town Hall to show the support of Redbridge council where a significant number of Keralites reside. Despite the sombre mood, the event raised over £18K.

MAUK also launched a Mega Raffle with attractive prizes sponsored by local, as well as, businesses from Kerala through which we raised a further £1875. MAUK also set up a stall at The London Mayor’s ‘Diwali on the Square’ celebrations although, this did not yield the anticipated results.

To date, we have raised over £40,000 towards charitable projects in Kerala. We believe that this is the largest amount raised by any single UK organisation to assist with Kerala floods relief. We are very much aware that this amount is only a drop in the ocean when compared with the amount, energy and will be needed to rebuild Kerala.

To honour the advice of the majority of our donors, we decided to directly invest in projects that will benefit communities rather than individuals. To gather ideas and gather suggestions, we held a consultation meeting at Kerala House on Sunday, 21 October 2018. The meeting discussed many options of potential projects and a sub-committee with senior ex-officials of MAUK was formed to monitor developments and provide feedback from the member’s perspective.

After considering many potential projects suggested by various MAUK members and many referrals from Kerala, the Director Board has opted to start by investing in building provisions to assist communities where infrastructure was severely damaged or destroyed. Since we had a clear mandate from both donors and members alike, to only engage in projects that MAUK can monitor directly, we have teamed up with KeralaVision- a leading and reputable media company in Kerala, to deliver our charitable endeavours. Based on the feedback from KeralaVision staffs scattered across Kerala, we have decided to undertake the construction of several water treatment plants in remote villages of Kuttanad. Each plant will cost around Four Lakh Rupees to build. While MAUK provided the financial assistance, volunteers of KeralaVision supervised the day-to-day aspects of the construction. The completed the plants will be managed and maintained by a committee formed of residents including Panjayat officials.

Inauguration of the first water plant commissioned by MAUK in the secluded village of Monkombu took place in May 2019. The second plant in Vennattukadu and the third plant in the compound Chennamkari Government School, benefitting both students and villagers alike, is now fully functional. Together, these three plants help provide drinking water for around 500 families.

The direct access to these villages is by boat, and even construction materials had to be transported by boat. We salute the resolute of our volunteers on the ground, our partner organisation and the local people in getting these plants up and running despite the adverse weather and logistical difficulties.

Our charitable endeavours in Kerala has taken off in modest. So far, we have spent about half of the money we raised on three water plants in Kuttanad and to build a house for a low-income family in Thiruvananthapuram. We have also committed to building a home for another family in Chengunnur and a third one Konni municipality. We are keen to take on more charitable projects in other parts of Kerala, particularly infrastructure projects that would benefit large numbers of people and invite suggestions from our community members. Projects we are looking for may not necessarily have to be flood-related. Still, it must contribute to the improvement in living standards of communities or individuals and must have a dedicated team of volunteers to oversee the project in a timely and transparent manner. If required and practically possible, we can seek the assistance of our partner organisation, KeralaVision to manage projects that may not have enough volunteers locally.

In the meantime, we are continuing with our efforts to raise more money for our charitable endeavours in Kerala. If you would like to contribute to MAUK Charitable Endeavours in Kerala, please click on the donate button on the top right of this get in touch with us. We are grateful to the staff of the East London branch of Barclays bank for their continued efforts to raise money for our charity projects in Kerala.

We can all agree that rebuilding Kerala is a mammoth task that will take years. Kerala needs our continued support to do this. To enable MAUK to play its minor part in this Herculean task, we request your continued help, support, advice and guidance. In return, we promise to use the funds efficiently and effectively, update you regularly through our website and social media and have a clear audit trail for the money spent. We take this opportunity to thank again every individual and business that donated to MAUK charitable endeavours in Kerala. Moreover, we thank you for the faith you have placed on us.